There are three reasons I keep going back to Nobu on Old Park Lane in London:
1) They serve my favorite champagne, Billecart-Salmon Brut Rose, by the glass
2) The signature dish: Miso Black Cod
3) Green tea ice cream


Even as newer and trendier Asian eateries are constantly opening in London (the new Hakkasan in Mayfair, Yauatcha, Zuma, to name a few), Nobu maintains its reputation as a consistent favorite. Popular amongst visiting businessmen and high-brow international tourists staying at the nearby hotels on Park Lane, I've still never been able to get a reservation earlier than 9:45pm (and I know ALL the angles). It would appear then, that Chef Nobu Matsuhisa's sushi business is booming.
A lively space with Hyde Park views on the second floor of the building that houses the famous Metropolitan London Hotel, Nobu has been serving "new style" Japanese with a Peruvian flair since 1997. The restaurant has also been awarded a Michelin star. There is a large sushi bar and the overall space can accommodate 150 people. 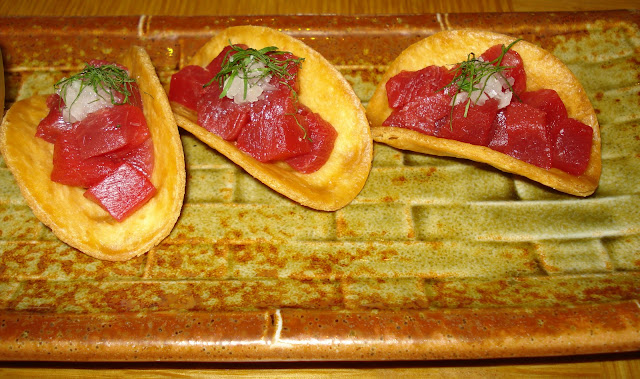 Dessert: Chocolate Bento Box (chocolate flourless cake with green tea ice cream), Lollipops (vanilla ice cream covered in chocolate), Banana split 3000 (poached banana, hot chocolate foam, saffron crumble and torrone ice cream), as well as extra Green Tea Ice Cream on the side (as if we were lacking on the desserts!).
﻿
Pin It
Posted by Alexandra D. Foster at 11:46 AM