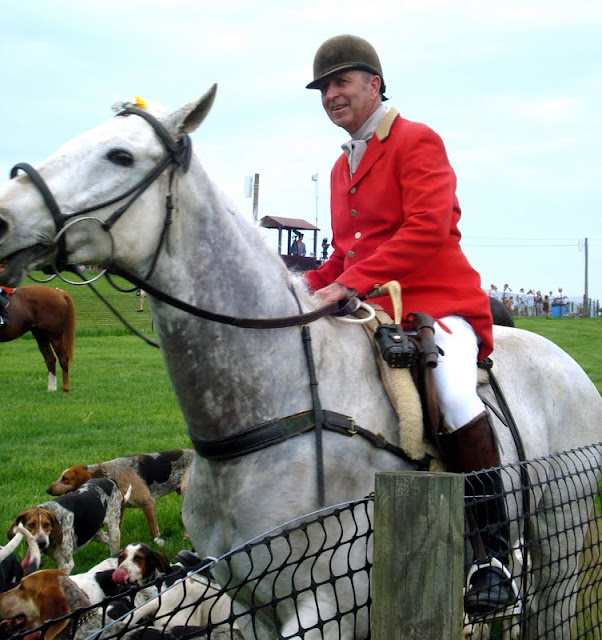 This weekend, Henry Francis du Pont's Winterthur estate will be home to a day of steeplechase racing known as Point to Point, which takes place each May. This is one of the most important dates on the social calendar for Brandywine Valley residents. Thanks to two of my dear friends who are Wilmington, Delaware natives, I have partaken in the festivities of Point to Point for many years. Guests can purchase tailgate spots for their car along the race course, or simply come for the day as spectators. Many assigned tailgate spots have belonged to the same family for generations and generations (like the du Pont's) and the lower the number, the better the position of the spot along the course. My friends have had spot #13 for years and it is a prime location to watch all of the action up close.
Gates open at 10:30am for tailgaters and 11:30am for general admission. The first pop of champagne corks can be heard shortly thereafter. The tailgates themselves are elaborate arrangements of sterling silver, flowers, candelabras, catered food spreads and non-stop libations. As there is an award presented for best tailgate picnic display, there are some serious competitors!
Apart from the race itself, there are many other activities that take place during the day. Elaborate hat wearing patrons can walk around the grounds and visit the tented marketplace that sells clothing, jewelry, hats and equine gear. There are activities for children during the day as well, including stick horse races and pony rides. In addition, there is a stunning display of some of the most prestigious antique automobiles including Rolls Royces, Bentleys, and even older antique steam autos.
The day kicks off with a parade of antique carriages led by legendary resident Frolic Weymouth, a renowned artist, du Pont heir and founder of the Brandywine Museum and Conservancy. This is followed by the pony races on the steeple chase course and the release of the horses and hounds, before the actual horse race begins. 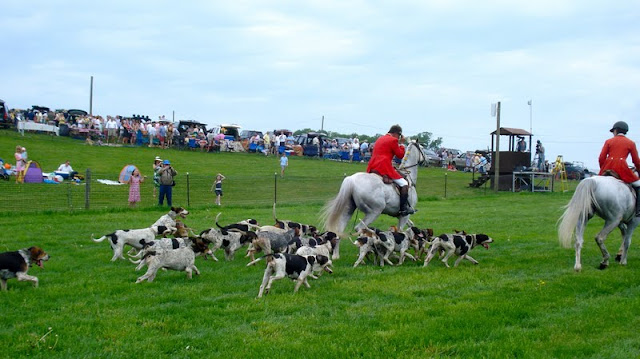 The steeplechase is a form of horse racing that involves jumping fences and ditches as well as any other naturally intervening obstacles along the countryside. The name comes from early races where the orientation of the course was set by a church steeple. Today, the official name for this sport is National Hunt racing.
After a long day of sun, races, bubbly and mint julep's, the coveted after-party invitation is to Frolic Weymouth's 250 year old country home in Chadds Ford, Pennsylvania, which is on the National Register of Historical Places. His home, known as Big Bend, is named after a curve in the Brandywine River and is surrounded by acres and acres of gorgeous rolling green hills and miles of carriage trails. The inside of the home makes you feel as though you have just been transported in time back to the late 1700s.
I have some poignant memories from Point to Point over the years, from a blistering sunburn that kept me out of work the next day, to the year we tailgated out of a friend's brand new Rolls Royce Phantom and then I was surreptitiously elected the most sober to drive the gargantuan $350,000 car through the narrowest of country roads from the steeplechase to Frolic Weymouth's home. Oh yes, and of course, the year I sat near Martha Stewart at Frolic's party.
Pin It
Posted by Alexandra D. Foster at 6:41 AM