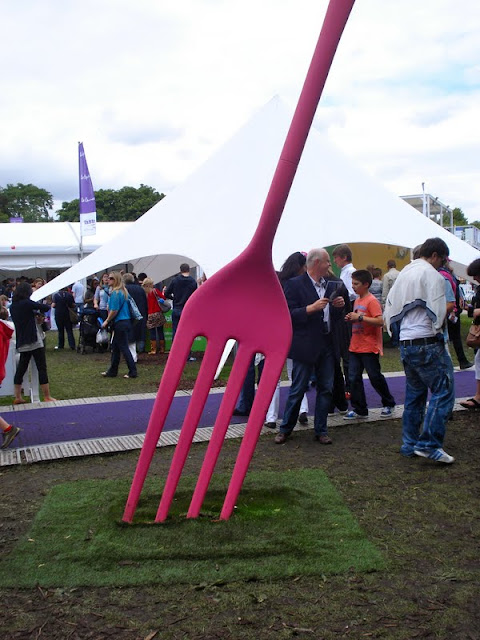 Last weekend I participated in the Taste of London, held annually over the course of four days in London's Regent's Park. The UK's largest restaurant festival, this sell-out event hosted 50,000 people this year and served over 200,000 Michelin starred dishes.  Major chefs from forty of the best restaurants in the city prepared signature dishes, and even Gwyneth Paltrow was on hand to sign her new cookbook, Notes From my Kitchen Table. For anyone who is a true foodie, this is a fun and delicious event that is not to be missed. Dates have already been announced for the 2012 festival, so if you find yourself in London next June, this is a cost effective way to sample signature plates from some of the city's culinary gems.

Each restaurant prepares three to four small plates and then lists their menu at their individual booth. Guests can purchase as many dishes throughout the day as they like, and the currency used at the festival is the 'crown.' A packet of 20 crowns costs ₤10, and staff members selling crowns circulate amongst the crowd, so it is quite easy to buy more. There are also many cooking demonstrations held throughout the day and in addition to the restaurant booths, there are many stalls where you can purchase various food items from local producers such as cakes, cookies, ice creams, cheeses, biscuits, sauces, etc.

The atmosphere is a festive one, and there are many bars under various tents where you can sit out and have a cold drink. Pitchers of the famous British Pimms (Pimms, lemonade and chopped fruit) is a favorite here. British Airways, the major sponsor of the event, has a wonderful VIP tent with free alcohol and snacks, open to anyone who is a BA frequent flyer (just show your card).
Each individual restaurant decorates their own booth at the festival, and many have gorgeous flower arrangements, hired dancers, musicians or people in costume helping to serve the dishes.
Floridita, a Cuban restaurant in the Soho area of London, hired a Cuban band to play at their booth and also served mojito drinks, using real pineapples as the glasses. See a short video of the band here:

Pin It
Posted by Alexandra D. Foster at 3:19 AM