For those of you at all interested in interior design, this week was one of the biggest weeks of the whole year for the industry here in . I met so many of the famous interior designers that I adore, that I had to keep pinching myself. The week kicked off on Sunday with Decorex, a trade show that has been taking place for over thirty years, where all of the exhibitors are hand-picked and allows anyone in the industry to see the best of what is new in interior design, all under one roof. The show, which takes place over the course of four days in , also includes a daily speaking program. On Sunday I listened to the world-renown Nicky Haslam speak. I was so intrigued by his life and background that I went out and bought his autobiography, Reedeming Features.
﻿
On Tuesday I went to the Design Centre at Chelsea Harbour for their annual Focus/11, where each showroom launches their new collection for the season and features lively discussions, book signings and "in conversation" sessions with famous industry personalities. I started the day by having Kelly Hoppen sign my copy of her latest book, Ideas. I almost lost it when she asked me what I do in London and then handed me her personal card with her mobile number and asked me to come give her a private showing of the new Liberty furnishing fabrics range!!

Next up was a discussion with Barbara Hulanicki, a fashion designer that started the super iconic store, Biba, in London, in 1964. Revolutionizing fashion with her offerings at Biba, and catering to the likes of Mick Jagger and David Bowie, it is a little known fact that Anna Wintour worked in her store for the summer helping cutosmers in the fitting room! Barbara later went on to re-invent herself and became an interior designer in the early 80s in Miami. She is largely responsible for making Miami what it is today. You can see her Miami hotel work here. Today she continues to design for various brands including Top Shop. 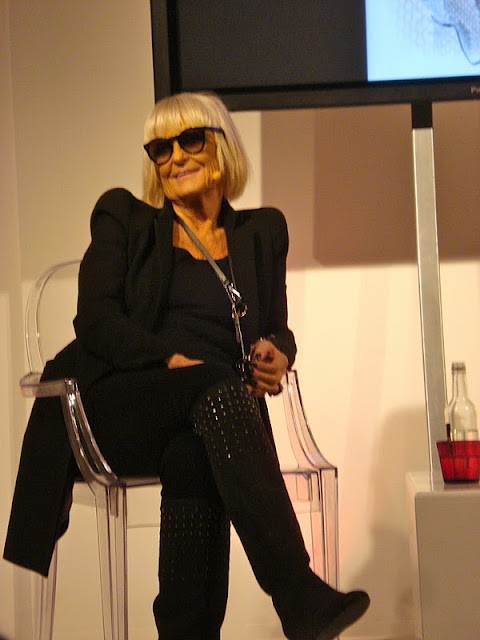 After visiting various fabric showrooms at the Design Centre, I ended the day by going to hear Barbara Barry in conversation with Susan Crewe, the editor of House & Garden Magazine here in the UK. What an inspiration! The talk was followed by a lovely tea in the Baker showroom, where Barbara made the rounds to speak with each of us individually and sign copies of her new Baker furniture collaboration catalog.
﻿﻿﻿ Pin It
Posted by Alexandra D. Foster at 2:08 AM