The hottest table in London right now is Meat Liquor, a former food truck serving all-American hamburgers, chilli cheese fries, fried pickles, onion rings, buffalo wings and the like, which has now found a permanent home as a restaurant off Oxford Street in Marylebone. The smell of burgers will hit you before you even round the corner of

Here’s the lowdown:
1)       The inside of the restaurant is very dark and looks like an abandoned, bombed-out, graffiti ridden air raid shelter (ie, zero ambiance).
2)       The American music they blare on the radio inside is so loud you can’t even hear yourself think; forget about conversing with your friends at the table. Not to worry though, you will have exhausted all conversation topics while waiting in line outside anyway. You will most likely have to share a table with strangers too, so you won’t be airing dirty laundry here.
3)       Service is as I find it in the rest of the : not up to American standards, though they did pay for our cocktails because they had to move us to another table halfway through dinner.
4)  Food is served directly on trays, and they leave you a roll of paper towels on the table to clean yourself up
So finally for the food: the burgers are so greasy your hands slip off the bun, but they are good! They all come cooked the same way (roughly medium rare) and you don’t have a choice, but the meat is tender and melts in your mouth. I couldn’t figure out what was the more prominent sensation: the delicious taste of the burger or the guilt I had over eating the absolutely instantaneous artery-clogging patty. The chili cheese fries and buffalo wings with blue cheese were also very authentic. This isn't a gourmet burger joint, but if you have a true craving for a down and dirty greasy American burger, look no further than Meat Liquor. I actually overheard one woman exiting the restaurant exclaiming "That is the best burger I have ever eaten in my life!" Try it for yourself, if you dare brave the line. 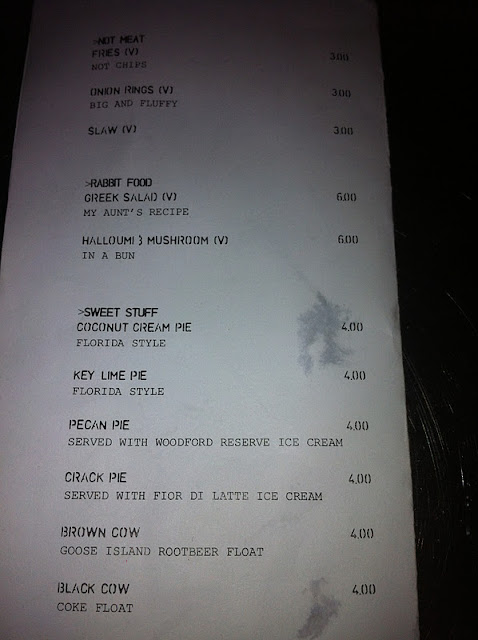 Pin It
Posted by Alexandra D. Foster at 5:59 AM